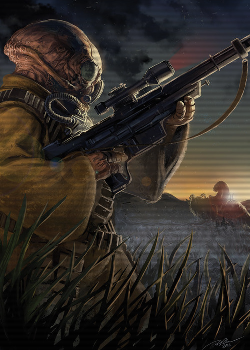 Gand culture is divided in 12 tribes. There is a 13th tribe, but it is a special case. Each tribe is further devided into hives. A tribe is usually made up of about 4 hives. Each hive focuses on one or more aspects of society within the tribe, such as farmers, craftsmen, and so on. Each hive is made up of a number of nests. The number of nests in each hive varies greatly.

Each tribe is generally self-sufficient, although some tribes tend more towards one aspect of society than another. Due to the nature of the nests and hives, each tribe is genetically unique. Interbreeding between tribes is rare. The tribes have a history of war with one another. Although they are not active at war, under the decree of the Ruetsavii'taa, most tribes have strong rivalries and grudges against at least one tribe. Some tribes contribute more to the special classes, such as ruetsavii and findsmen, than others.

Each tribe is ruled by a chieftain, or Kaalif. The chieftain carries a ceremonial weapon known as a Bak'ruuk. It consists of a long pole, with long, sharp, double blades at either end. Mastery of the technique required to use a Bak'ruuk can take many years and is practiced with poles. Each chieftain is expected to be skilled in their use, although they are almost never used. They are considered too ancient and sacred for all but the most important of battles. Each tribe also has a unique style of knife. These knives have religious significance and are known as Bak'taar. No Gand may use a Bak'taar belonging to another tribe.

Gand do not believe in death as a punishment. They believe that all individuals, even criminals, can be useful to society. Those who spurn the ways of their people are shunned and exiled. Those who break the law are reduced in name and status. If they have no name or status to reduce, or if that is insufficient punishment to fit the crime, they become a slave in service to the victim, or family of the victim, of their crime. If there is no specific victim, they are placed in the service of the ruetsavii and Ara. They will remain a slave until their debt to society is paid, at which time they will become free once more. Slaves are not treated badly, or with disrespect, but must be well taken care of by those they serve. It is a crime in itself to injure slaves, or allow them to come to harm through neglect, and one who does so may find their positions reversed.