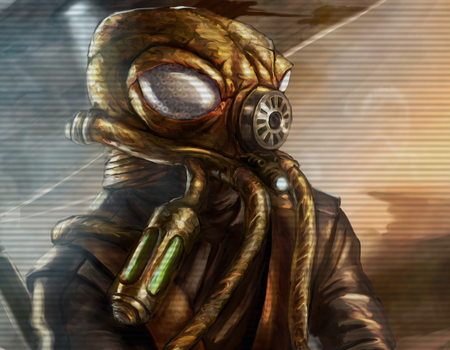 When speaking, Gand refer to themselves and others in third person. They do not use pronouns to speak about themselves, either. Typically, they will use 'this one' and 'gand' to mean themselves. They are allowed to use the names of others, though. Any Gand who has not made a name for themselves that defies this speech pattern is insulting their race and heritage. Gand who have performed such tasks as to be worthy of recognition may be granted the right to use second person ('you'), personal pronouns, and even first person and their full nest's name. Such Gand are called Janwuine, and are rare. Non-Gand must be declared Hinwuine in order to use first person on Gand. If they are not, they will be considered rude, and may find themselves ejected from the planet, or worse.

Gand language often places two words or concepts together, combined with an apostrophe, to create a term for something from those ideas. Apostrophes are also commonly used in names, to junction syllables not otherwise used together. Some of the interesting or important terms are:

Janwuine - Individual. One allowed to use first person.

Hinwuine - Honoured guest. A non-Gand granted permission to use first person on Gand.

'taa - Used with another word to indicate the highest position of that type. E.g. ruetsavii'taa or kaalif'taa.

'ruuk - Used with another word to indicate the most important item. E.g. Bak'ruuk or Tal'ruuk.

Meelac - Animal native to Gand. Similar to a camel.

Uumlourti - A Gand delicacy. Fatal to most other species.